"The Great Warming: Climate Change and the Rise and Fall of Civilizations" - Brian Fagan

“The Great Warming: Climate Change and the Rise and Fall of Civilizations” by Brian Fagan examines how climate change affected people in the past, how it shaped civilizations, and how those climate changes came to influence the world we know today. The use of modern technology, historical accounts, and other data made it possible to better understand the conditions that past societies faced when dealing with weather.
Fagan concentrates his book on a period of time around the year 800 through 1300 A.D. This time period saw a shift in global climate that affected all civilizations at the time, some for the better while others for the worse. This time period is known as the Medieval Warm Period and the warmer weather, along with shorter, less harsh winters, brought about a great shift in the world, in particular to the people of Europe. Populations began to flourish in Europe as there was now enough food and resources to provide for a larger amount of people. The small little villages of Europe soon turned into thriving hubs of population creating the major cities of modern day Europe.
This warm period however did not bode well for other civilizations of this time. Eurasia and the western part of the now United States saw long periods of drought. Natural resources began to dwindle or become non-existent. Fagan attributes these harsh conditions leading to the rise of Genghis Khan as he stormed through Eurasia making his way to Europe. The competition and search for new resources drove these conflicts. Some civilizations in North America died out or were incorporated with other communities due to the harsh conditions. Resources that these civilizations had depended on were now becoming sparse.
The warm temperatures and desirable climates would not last for Europe. Towards the start of the 14th century temperatures began to cool and ushered in what is known as a Little Ice Age. The change in temperatures along with the emergence of the Black Plague would reverse the prosperity and population booms that Europe experienced. Fagan does a good job of setting hypothetical scenarios of what each civilization might have faced during the time. Using scientific and historical sources provides an authenticity to his research and the settings he describes. “The Great Warming” is a great look into how climate change affected all of the world’s civilizations at this moment in history and how it can impact civilizations of the future. 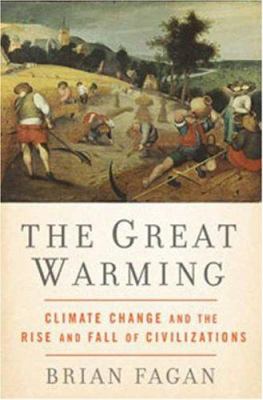