Interdisciplinary artist Roy De Forest (1930-2007) grew up in a farming family, first in North Platte, Nebraska. A combination of unfortunate events, including drought, grasshoppers, and the Great Depression, necessitated a move west to the state of Washington’s Yakima Valley where the De Forest family harvested pears and plums. Growing up on farmland surrounded by cows, dogs, horses, and other animals, it is clear from viewing De Forest’s work just how important animals were to him throughout his life.

It was at Yakima Valley Community College where De Forest first began to study art. At the age of 20 in 1950, De Forest moved to San Francisco, California to continue his studies at what is now the San Francisco Art Institute. He went on to receive both undergraduate and graduate degrees in art from what is now the San Francisco State University. Between these two art degrees, De Forest was drafted into military service for 2 years as a sign painter during the Korean War. In 1965, De Forest began a 27 year period of teaching at the University of California at Davis (UC Davis). De Forest and other Northern California artists were associated with regional art trends such as the Funk Art and Nut Art movements, the latter of which De Forest described as being “a squirrel in the forests of visual delights.” Nut Art was less of a “movement” and more of a camaraderie of a group of artists affiliated with UC Davis who sought to embrace “the mad genius in all of us.”

Rejecting bilateral symmetry, realistic visual perspective, and minimalist abstract expressionist currents, De Forest is best known for maximalist compositions of animal figures, most frequently canines, embarking on enigmatic quests across fantastical landscapes. In 1973 he was asked why he painted a window on the side of a horse. Part of his answer gives an incredible amount of insight into De Forest’s world in one long sentence: “If we could change our cars (metal autos) to the upholstered interior of a giant rabbit or make a horse into an apartment house and were able to see both inside and outside the horse or indeed the rabbit, we might see for the first time that everything we see both inside and out is not only part of us but part of everything all seen at once, in rapid succession with overlapping images that become like a clear pool as we look into them—in fact we might see finally both life and death, and what is in between, the beginning and the end—a tombstone for all the mislaid tigers with eyes that shine in the dark hoping for the light.” Described by others in his obituary in the Sacramento Bee in 2007 as “charming, yet penetrating, intense, and full of meaning,” De Forest described himself as an “obscure visual constructor of mechanical delights.” While De Forest worked predominantly in the mediums of painting and assemblage sculpture, he also dabbled in printmaking as can be seen here in these 8 displayed lithographs from the Roswell Museum’s collection De Forest created between 1978 and 1980.

More than just the usual labels applied to him as “playful” and “whimsical,” De Forest’s work consistently centers animals in difficult to understand scenes where waves of energy radiate with bright colors overlapping with dark linework. In 1980, the artist intimated “The function of my work is that it allows me the possibility to construct hypothetical beings, situations, and worlds and preserve this possible world, with its animals and creatures, for my own private viewing, fun, and enjoyment.” De Forest’s work is also often labeled “frenetic,” “idiosyncratic,” and “psychedelic,” but there is something more in these tightly packed moments of fantastical animal adventures.

In 2008, shortly after De Forest’s death, Mario Naves wrote in The New York Observer that this artist’s works “aren’t fantasies; they’re real. An artist’s responsibility is to create a fiction we can enter, experience and believe in. How convincingly it’s realized and how much the artist yields to its logic determines its aesthetic viability.” There is intense introspection and a reverence to the sentience of depicted creatures. The consistency of style and composition together with his prolific artistic production leads us to see each artwork as a chapter of De Forest’s own private mythology. He described his depicted worlds as “unknowable [though] hauntingly familiar” and he viewed artistic practice as “one of the last strongholds of magic.” Since De Forest left these 8 displayed works untitled, there is no decoding aid other than your own subjective interpretation of these wonderfully mysterious animal journeys. 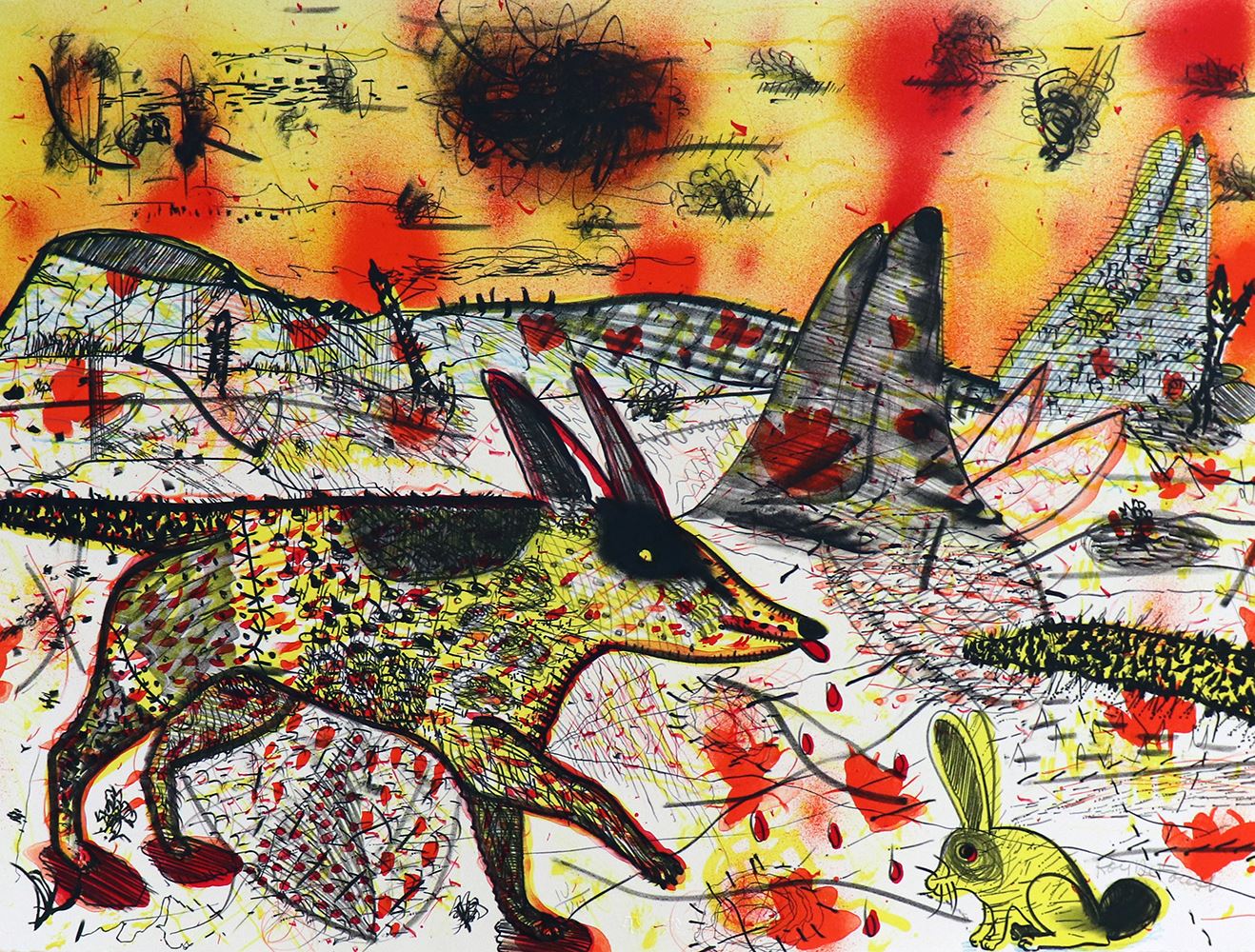 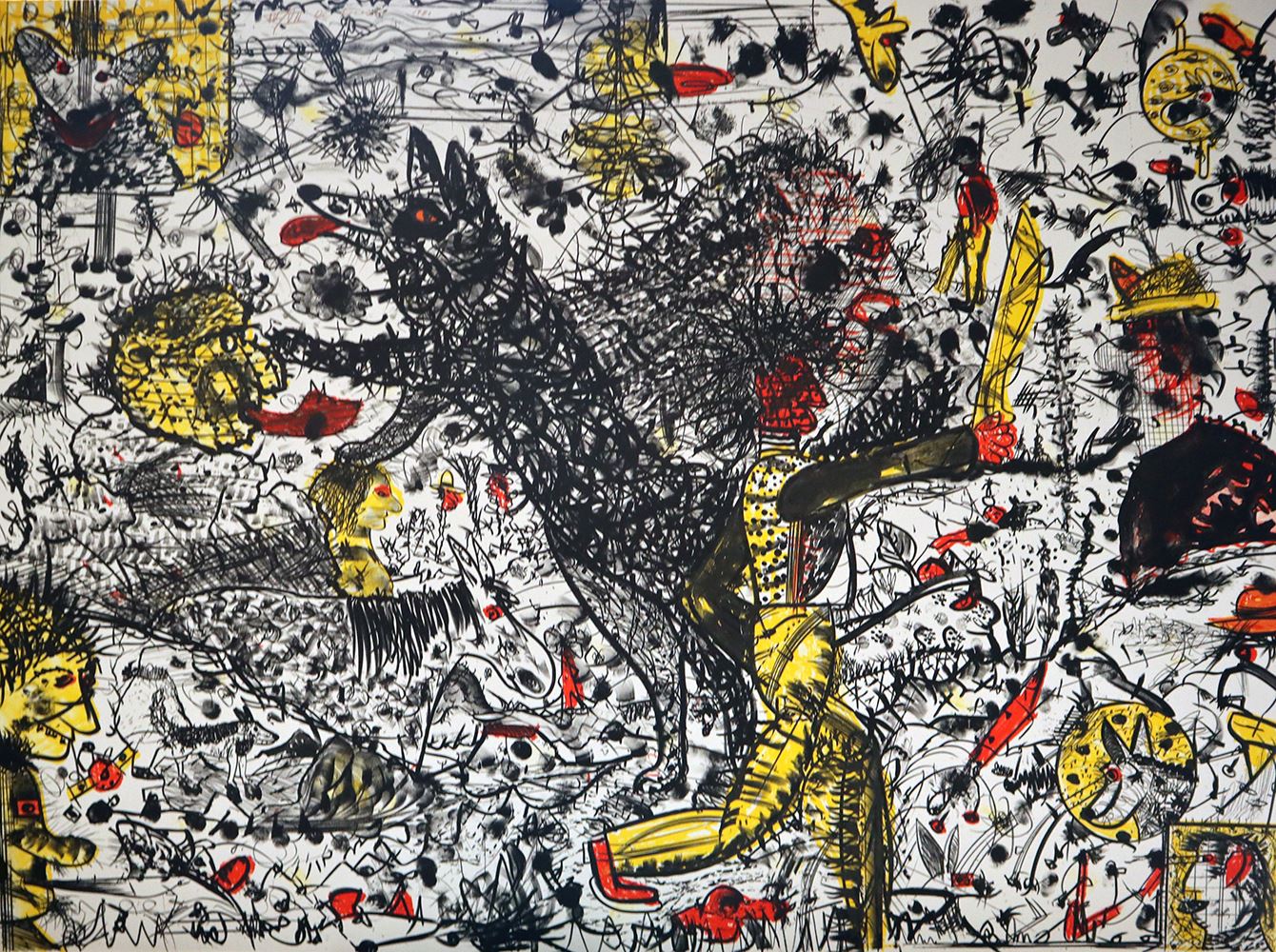