Roderick Mead: Looking Between the Lines

This exhibition highlights more than thirty works by Carlsbad artist Roderick Mead (1900-1971), a recent gift to RMAC from the Marilyn T. Joyce Trust. A master printmaker and painter who explored Surrealism and abstraction, Mead entered his creative maturity in 1930s Paris while working at Atelier 17, under the direction of printmaker Stanley William Hayter. Regarded as one of Europe’s most avant-garde printmaking workshops, Atelier 17 attracted such notable Surrealist and abstract artists as Joan Miró, Pablo Picasso, and Yves Tanguy, and this highly creative atmosphere deeply influenced Mead both stylistically and conceptually. At the onset of World War II, Mead returned to the United States, eventually settling in Carlsbad, New Mexico.

Throughout his career, Mead endeavored to create work that transcended fleeting trends or fashions, stating that, “I aim in an abstract way toward a universal art and eventually I hope to do something timeless.” His prints and paintings invite us to look between the lines to discern deeper meanings, to see beyond his technical mastery and perceive the ethereal, otherworldly quality his compositions evoke. Encompassing prints, oil paintings, and watercolors, the gifts featured in Looking Between the Lines underscore Mead’s versatility, and substantially increase our holdings of work by this important, but often overlooked, artist. RMAC is excited to have this generous bequest, and is eager to share it with visitors. 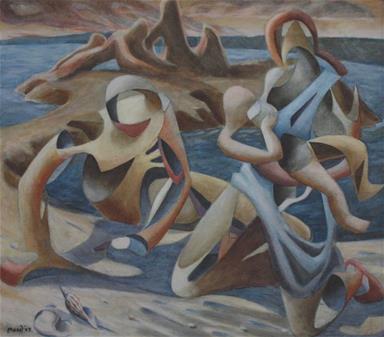